There are many options available when it comes to choosing the best duvet.

But do you need a duvet?

Why should you invest in one?

And how can you find out which is the best duvet for you?

Like with pillows and mattresses, it can be tricky to know which duvet is the best and how to choose one.

We are here to guide you and help you choose the best duvet in the UK.

The Nectar Duvet is a 10.5 tog breathable, all-seasons duvet that offers temperature-controlled comfort.

This all-season 10.5 tog duvet is perfectly temperature-controlled to leave you feeling refreshed and well-rested, no matter the season.

All about the Nectar Duvet

It is exceptionally breathable.

The Nectar duvet is machine-washable at 60℃.

It comes with free shipping and a 2-year warranty. 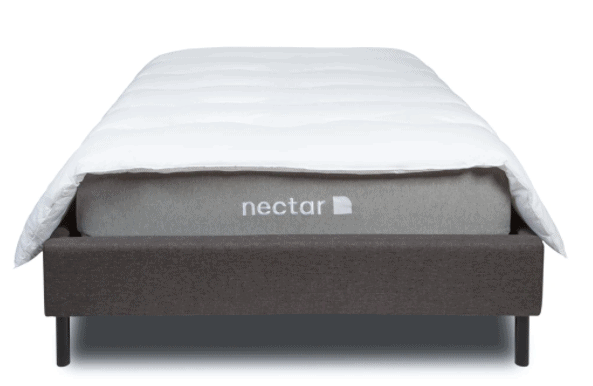 The Eve Yin Yang Duvet has a split tog, with one side warm and fluffy and the other cool and refreshing.

Nothing is less comfortable than feeling too hot or too cold at night - that's why Eve offers the Yin Yang Duvet, with one side warm and comforting and the other cool and refreshing.

All about the Eve Yin Yang Duvet

The Eve Yin Yang duvet is perfect for summer and winter.

Made of Aerelle® Softflex hollow fibre fill, it is easy to plump, wash, and dry.

You can machine-wash the cover at 40°. 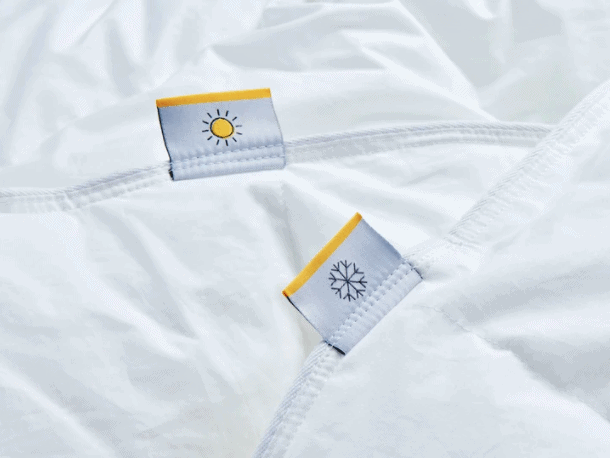 The Mela Eucalyptus Air Duvet is made of 100% eucalyptus, inside and out.

This 100% biodegradable duvet is cool, comfortable, and perfect for any season.

All about the Mela Eucalyptus Air Duvet

The Mela Eucalyptus Air Duvet is a soft and fluffy duvet made from 100% eucalyptus, inside and out.

The eucalyptus fill allows air to circulate, keeping you cooler and more comfortable.

Vegan-friendly, this duvet is also 100% biodegradable and uses 10x less water than cotton during manufacturing, making this a product that's both less wasteful and more sustainable.

The Mela Eucalyptus Air Duvet comes with free shipping and returns and a 30-day trial period. 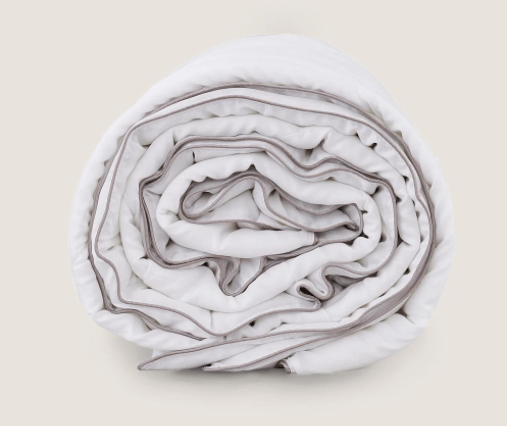 This 10.5 tog temperature-regulating duvet is perfect for any season.

All about the Panda Cloud Duvet

The Panda Cloud Duvet is a 100% vegan duvet that combines bamboo and nano-microfibre for a "down feather feeling".

It's easy to machine wash, dries naturally in half the time of regular duvets, and quickly returns to its original shape.

Bamboo is also naturally thermo-regulating, making this 10.5 tog duvet perfect for any season.

The Panda Cloud Duvet has small corner loops so you can attach it to hidden straps in all Panda bedding for a free-to-wriggle night's sleep. 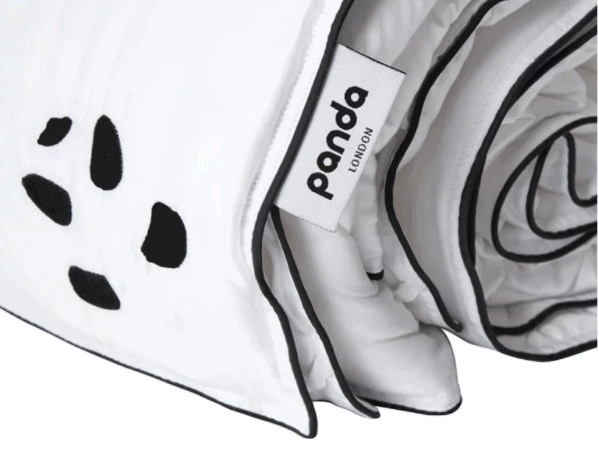 The Simba Hybrid Duvet is a convenient all-seasons duvet designed to keep you cool and comfortable.

This is a convenient all-seasons duvet with cool-night fibres that effectively regulates body temperature.

All about the Simba Hybrid Duvet

The Simba Hybrid Duvet is a convenient all-seasons duvet to suit your every need.

Designed with cool-night fibres and breathable cotton, this hybrid duvet puts temperature regulation first to allow for a cool and comfortable sleep.

It has a quilted design so the soft filling stays in its individual squared pockets.

The duvet is also hypoallergenic and machine-washable at 40℃, which is great for people prone to allergies.

You can also tumble dry the duvet on low heat. 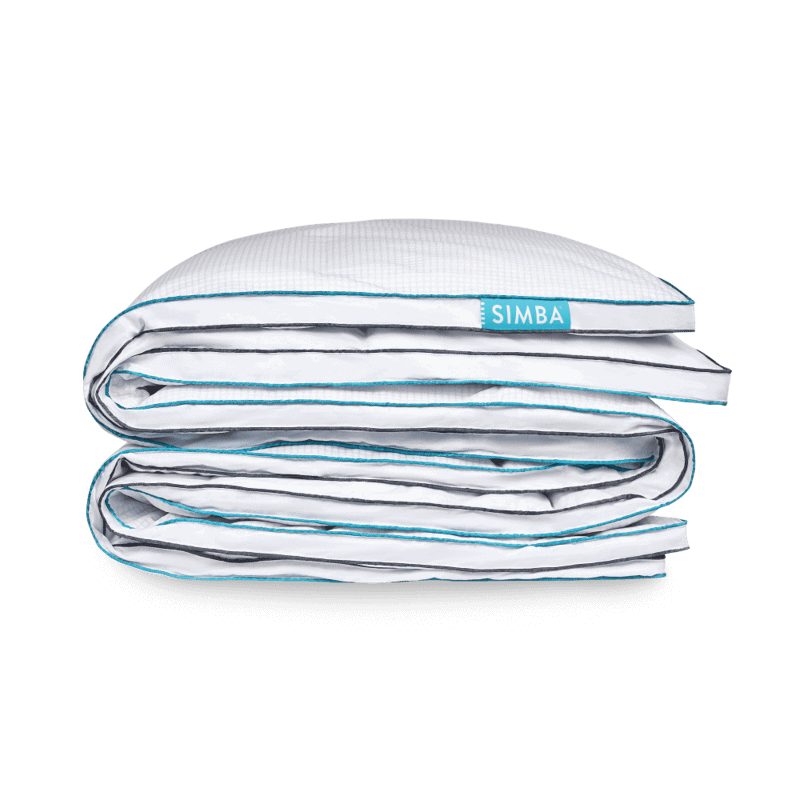 The Emma Cloud Duvet is a microfiber duvet made of temperature-regulating fibres to keep you cool and refreshed through the night.

A 6.7 tog temperature-regulating duvet perfect for any season.

All about the Emma Cloud Duvet

The Emma Cloud duvet is a microfiber duvet made of temperature-regulating fibres.

The breathable structure limits the reproduction of bacteria, making this a hypoallergenic choice.

With a tog rating of 6.7, this is the perfect choice for any season.

The Emma Cloud microfibre duvet is fully machine-washable up to 60°C. 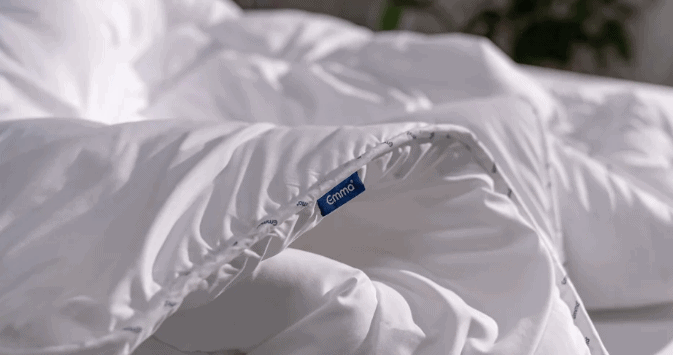 Why buy a duvet?

A duvet is an essential part of your bedroom, creating that perfecting cocoon feeling that makes it difficult to get out of bed in the morning - in a good way!

Duvets generally consist of a soft outer shell, often made of cotton, and an inner filling of down, feather, bamboo, or synthetic materials.

In contrast to blankets, which are often thin and heavy, duvets are light and fluffy, allowing you to move very freely.

They’re also warm and comfortable, keeping you snug at the ideal temperature, regardless of whether it’s summer or winter.

Having a good duvet guarantees that you’ll get a comfortable night’s sleep at the perfect temperature.

What are the key criteria for choosing the best duvet?

There are many factors to consider when choosing a duvet, including ambient room temperature, weight, material, and size.

If your room is cooler (below 18°C), then you will need to opt for a warmer duvet. If your room temperature is above 22°C, then a lighter duvet should suffice.

But also consider your personal preferences.

If you easily feel cold at night, then a warmer duvet will be ideal.

If you sweat easily or easily feel hot at night, then a less warm duvet will be better.

Note that duvets will have a tog rating to indicate their warmth. Lower numbers indicate a cooler duvet and vice versa.

The weight of the duvet is also important to consider.

If you’re a smaller person, then you might not want to be bogged down by a heavy duvet.

The weight of a duvet will generally vary between 180 grams and 500 grams per m² but it is quite heavily influenced by whether the duvet is natural or synthetic.

Synthetic duvets aren’t as thermal insulating as natural duvets and require more bulk to be as warm, so they’re generally heavier than natural duvets.

As we’ve seen, the material of your duvet will greatly affect not only its warmth but also its weight.

We’ll go into more depth below but remember that different materials have different properties, and you can choose synthetic or natural materials.

Finally, it’s also important to consider the size of your duvet.

This largely depends on the size of your bed and whether or not you’re sharing your bed with a partner.

We elaborate on duvet sizes below.

What are the best duvet fillings?

As with most things in life, there is no clear and straight answer to this.

Duvets are made from a wide variety of materials, all of which have different properties.

here is one broad distinction, though, and you’ll find two different types of duvets: Natural and synthetic.

Natural materials, of course, are the obvious choice for anyone focusing on organic.

While some people react to feathers, many other natural materials are antibacterial.

Winter duvets made of natural materials are also lighter than synthetic ones.

Common synthetic duvet materials include polyester in all its forms.

Which materials are suitable for those prone to allergies?

Surprisingly, only a few people are actually allergic to natural duvet fillings.

While you may certainly react to feathers, most allergic reactions are actually due to house dust mites and not due to the duvet filling.

This means that eliminating dust mites is the first concern.

Unfortunately, dust mites feed on skin scales, which are present in every bed, and they like to live in warm and comfortable places.

When choosing a duvet, make sure that the textiles aren’t woven too tightly.

A looser weave makes it less likely for skin flakes to get caught in the material, which, in turn, makes the presence of dust mites less likely.

Also always make sure that you encase your duvet in a duvet cover that you wash regularly.

You can also look for a duvet made of materials that can be washed at high temperatures.

How to choose the size of your duvet

Of course, your perfect duvet will fit the size of your bed.

For optimal comfort, we recommend that you choose a duvet at least 40 cm wider than your actual bed.

This ensures that the duvet will cover you even as you move around while sleeping.

A larger duvet is also preferable if you share your bed with a partner.

If you still find yourself fighting for the covers, though, it may be worth investing in individual duvets.

There are many factors to consider when choosing the best duvet.

Consider the temperature of your room, the weight of the duvet, the materials it is made of, and the size of your bed.

A good duvet will only enhance your sleeping comfort — but, as always, you’ll only get the best sleep of your life if you’re sleeping on an exceptional mattress.

We’ve given you our best mattress recommendations below.

Our selection of the best mattresses

Having a great duvet is one thing but you also need the best mattress you can find.

Here are our top recommendations.

My mum calls me "bear" because I like to sleep so much. I never knew that, one day, that would be a very useful skill. Can you tell that I've found my calling?

We can highly recommend these best-selling mattresses

Get 40% off the Emma Original, an award-winning soft & comfortable mattress that's suitable for all.

25% OFF SIMBA HYBRID
Current duvet discounts:
You may also be interested in:

How to choose a mattress

Which mattress is best suited to your needs? Find out here.

If you’re looking for the perfect pillow to help you sleep better, our guide on the best pillows will help you.

We have an affiliate relationship with some manufacturers, where we receive a commission on sales if you click over from our site. This does not affect the purchasing price. In contrast: By using our discount codes, you'll get the best deal possible.

Looking for the best deal? We track all discounts, vouchers, and coupons so that you will always get the best price through our site. No matter which mattress or product you end up choosing.

We're a team of sleep enthusiasts and experts. We test hundreds of sleep products - mattresses, pillows, toppers, bed frames, and more! - to provide you with the best reviews. Our mission is to help you make the right choice for your sleep. Read more about us.

We use cookies to provide the best services and features on our site and to improve the experience of our users. Cookies are data that are downloaded or stored on your computer or other devices. By clicking on "I accept", you accept the use of cookies. You can always disable them later. If you delete or disable our cookies, you may experience interruptions or problems accessing the site. Data protection and privacy
I accept